(Me) Hey folks. You’re at part one of the treasure hunt for what we like to call the DSAS, or the Dirty Sexy Alley Scene. You see, when my videographer was shooting scenes for the book trailer for City of Fallen Angels, well, she shot a scene deemed “too hot for TV” by my publisher. So the footage was cut. What to do with it? Vania, ever resourceful, made a little mini-movie out of it, added some effects, and voila, the DSAS. 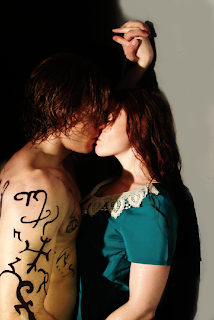 Now nothing happens in the DSAS that would be inappropriate in a PG-13 movie. It’s just . . . a bit passionate. But to make sure you really want to see it we decided to create a little treasure hunt across the blogosphere, featuring some of today’s top YA writers and their unwavering commitment to “makey-outy scenes.” You start here. Each blog leads you to the next blog, which will give you a letter. At the end, you’ll have all the letters and can unscramble them into the password that will allow you to watch the video. The password is Mortal Instruments-related, keep that in mind when figuring it out.

So starting here, the letter is: D

Your next blog is Holly Black’s, author of Red Glove. Go!